Create an Account - Increase your productivity, customize your experience, and engage in information you care about.

Brief History
McLennan County was created by the Texas Legislature in 1850 out of Milam County, and is named for Neil McLennan, an early settler. The county seat, Waco, had been founded originally as an outpost of the Texas Rangers, laid out by George Erath, and was known by 1850 as "Waco Village."

According to local lore, the first sustained flight did not occur in Kitty Hawk, North Carolina, but just outside Tokio, a small community in McLennan County, by a man flying a gyrocopter. 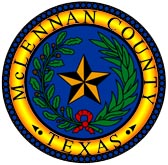